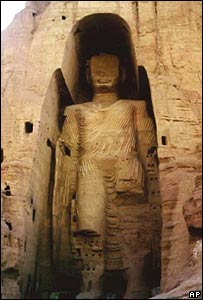 carved into the side of a cliff in the Bamyan valley in the Hazarajat region of central Afghanistan, situated 230 km (143 miles) northwest of Kabul at an altitude of 2500 meters (8,202 ft). Built in 507, the larger in 554, the statues represented the classic blended style of Gandhara art.

The main bodies were hewn directly from the sandstone cliffs, but details were modeled in mud mixed with straw, coated with stucco. This coating, practically all of which was worn away long ago, was painted to enhance the expressions of the faces, hands and folds of the robes; the larger one was painted carmine red and the smaller one was painted multiple colors.

The lower parts of the statues’ arms were constructed from the same mud-straw mix while supported on wooden armatures. It is believed that the upper parts of their faces were made from great wooden masks or casts. The rows of holes that can be seen in photographs were spaces that held wooden pegs which served to stabilize the outer stucco. 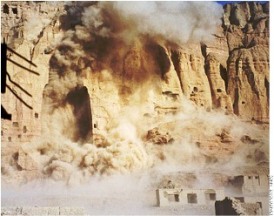 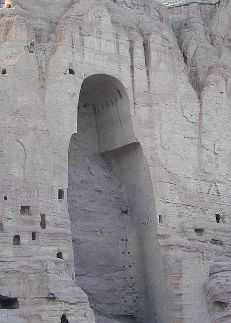 They were intentionally dynamited and destroyed in 2001 by the Taliban, on orders from leader Mullah Mohammed Omar, after the Taliban government declared that they were “idols” (which are forbidden under Sharia law). International opinion strongly condemned the destruction of the Buddhas.

Presentation on Conservation of Bamyan Buddhas.

After the liberation of Afghanistan, Jansen was one of the first to go to the Bamyan Valley along with other experts to inspect the damage in the spring of 2002.

In the past few years, around $1.5 million was used to stabilise the rocks. Experts saved the rock fragments with the help of historic pictures a 3-D computer animation of both Buddha figures, which has been prepared at RWTH Aachen University.

“We have the method to repair the Unesco World Heritage. However, the question is: Should the Buddha statues be rebuilt?” Jansen said.  According to him, the governor of Bamyan wants to rebuild the statues. Yet, the Afghan government disagrees.