AS floodwaters rose in Ipswich, one man risked everything to save the life of a kangaroo. While the man is unknown to many, Ipswich photographer Nick De Villiers was on hand to catch the action and the man-of-the-moment. Mr De Villiers said the kangaroo jumped into the floodwaters near One Mile bridge at about 6.30pm yesterday and was quickly swept downstream, unnoticed by SES volunteers. The man then raced across the water, about five metres away from shore despite police protests to grab the kangaroo and carry it to safety. While the man disappeared shortly after, the kangaroo was well cared for. “It seemed a bit shocked,” Mr De Villiers said. “But when we left a group of people were around it and someone had a towel out to keep it warm. It seemed to perk up a bit after that/”  Source: The Courier-Mail

Read the story in “Mirror UK”  By the UK paper these photo’s were taken in December.

FLOODS that have tormented Queensland for almost three weeks are about to hit the state’s biggest city.
As towns across the region continue to reel from record devastation, Brisbane is now in the firing line, with residents having just hours to prepare for a flood worse than 1974.

Ten lives – including five children – have already been lost in the rapidly deepening crisis. Another 78 people are missing after an ”inland tsunami” tore through the Lockyer Valley on Monday.

Prime Minister Julia Gillard yesterday warned Australia to brace for a higher death toll, with state authorities flagging an expectation it could more than double. She urged the nation to stand ”shoulder to shoulder” with Queensland.

The surging torrent of water from the Lockyer crisis will combine with record releases from Wivenhoe Dam as soon as tonight, to see dramatic flood peaks in Ipswich then Brisbane that will affect up to 45,000 homes.

Read the full Story in the “Courier Mail”

Well the rain has finally stopped here in Brisbane, with only very, very, light showers. This of course has allowed a lot of the flooded roads to recede, in a lot of areas, a blessing for those people who had water lapping at their door or for those that had water actually enter their homes. For a lot the clean up begins, as the water leaves. For those that have been following this blog, you would know that my Husband got caught at work yesterday during the storms and very heavy rain we were all experiencing. The photo’s below are the reason he was stuck at work. The photo’s are in the area that my Husband works. As the rain stopped very late last night, most of the people who were stuck where my Husband works, as well as Hubby, were able to get home as the water slowly went down. 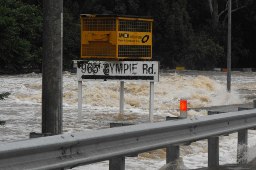 As you may have read in the article from the paper, all that water from Toowoomba and surrounds is on its way to Brisbane, the CBD has been shut down, all power to the main city area has been turned off, this of course will affect a lot of people, I heard around 100,000 people, but I can’t confirm that amount. Sometime today we are expecting a king tide for the Brisbane river, on top of that we are expecting all the other water that has hit Toowoomba, and the powers that be had to open Wivenhoe Dam, this is all going to hit at once.

As you can see the Brisbane river is rising slowing even without the extra
water that is expected to hit today.

A lot of people are already in evacuation zones throughout the city and suburbs. Most of the evacuation centers are allowing pets, but the number is limited. All evacuation centers have food, water, mainly the essentials, and from what I have heard on the radio are fully stocked and ready. There are already a lot of people at the centers, but they are expecting thousands more today. A lot of people will not be going to work today, for others their work will be mainly cleaning out the mud and rubbish that have come into their places of work with the flood water. While Brisbane is waiting for the worse, we must not forget also the people up north in Rockhampton and of course a lot of others areas up there that are still cleaning up, and will actually take years before all the infrastructure is fixed as well as all the homes.  Our thoughts are still with you.
Where ever you are please stay safe, keep your radio on for updates, they are advising people to stay off roads unless you have to evacuate or it’s an emergency.

For coverage on what is happening minute by minute in all areas listen to 612 ABC Brisbane.
This can be listened to online, just click onto Listen Live, and allow the add on.
Here is the link:- 612 ABC Brisbane.

This entry was posted in Australia, Queensland and tagged Brisbane, Floods, Weather. Bookmark the permalink.

4 Responses to Kangaroo Saved, While Brisbane on Alert. (Queensland Floods)