Brisbane Lord Mayor Campbell Newman wants a judicial-style inquiry into southeast Queensland’s flood disaster as the confirmed death toll rose to 15.
A total of 33,701 properties in the capital were engulfed by the raging waters.

A visibly shaken Anna Bligh said Brisbane was a “war zone” that would take years to rebuild. More than 70,000 homes were without power last night, the CBD was a ghost town, and the Premier warned that many homes were damaged beyond repair.

While the Brisbane River stopped 1m short of the 1974 flood peak of 5.45m, the impact was still devastating, with homes submerged to the roofline in dress-circle Graceville and Chelmer in the city’s southwest, and at Yeronga and Fairfield on the southside.

A man, 24, drowned while checking his father’s flooded property at suburban Durack, in Brisbane’s outer west. The body of the 15th confirmed flooding victim, also male, was recovered from swollen Myall Creek in the Darling Downs town of Dalby, 216km west of Brisbane.
Read the full story in “The Australian”

City Feels Sting Of the River It Loves. 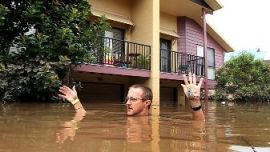 Brisbane’s love affair with its river will continue long after the floodwaters recede.
But the residents of the River City are going to handle the relationship a lot more carefully in future.

The floodwaters might have peaked a metre below the level of the 1974 flood ingrained in Brisbane memory, but the city’s embrace of a river lifestyle meant the destruction was more widespread and significant than before. More than twice as many homes have been inundated and public facilities and businesses are likely to be shut for months.
Read the full story in “The Australian”

From “The Australian” Audio-Slideshow:- Tony Koch on the search.

From “The Australian” Audio-Slideshow:-Hedley Thomas in Brisbane.

The Australian Picture Gallery from readers.

This entry was posted in Australia, Queensland and tagged Brisbane, Floods. Bookmark the permalink.