The Clean Up Begins/ Flood Crisis in Pictures (Queensland Floods)Video

As in any love story, someone, at some point, ends up wearing their heart on their sleeve. Yesterday, the entire city of Brisbane did just that. While the river settled back into its familiar rhythm, it left its victims and its handiwork exposed for all to see. This first day of the epic clean-up had turned Brisbane inside out.

Footpaths in West End and Rosalie and affected suburbs all over the city were crowded with pyramids of sodden carpets, ruined furniture, blown televisions, wrecked stoves, mattresses, linoleum, timber, lights, toys and, in more than a few instances, the actual kitchen sink.  Here were entire dining-room settings sitting by the gutter in the sunshine, with no guests. In street after street, private Brisbane lives were torn open to the world. 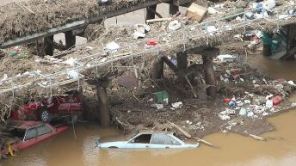 Brisbane yesterday was on the march. It was a hive. A busy nest. Its carriageways were congested with police vehicles, fire trucks, dump trucks, rubbish trucks, Army transports, glass suppliers, tow trucks, fuel trucks, graders and diggers on flatbeds, strafed at all points of the compass with flashing emergency lights.

Read the full story in the “Courier Mail”

Four Days That Broke Our Hearts. 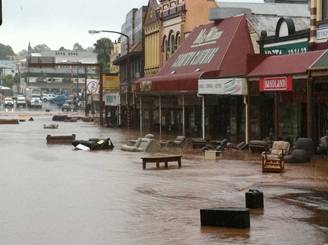 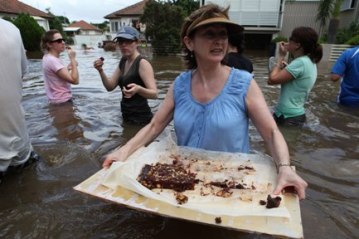 All photo’s here at the Courier Mail Picture Gallery, there are larger versions of the photo’s above in amongst these pictures. Some photo’s may be disturbing.

This is a fantastic video by Reporter Rodney Chester from the Courier Mail  he finds the Queensland spirit alive and well in Brisbane’s Bellbowrie, it is a very good look at the human side of these floods, very sad, but well worth watching.

It’s a credit to everybody that is helping in this terrible time, so many people pitching in, strangers are helping strangers, a lot of heroes have emerged out of this crisis, everyday we hear so many story’s of people risking their own lives to try to save others, and of course we have heard the tragedies as well. There are still people missing and searches are still going on, a terrible task to undertake but it has to be done. Of course it is just not the people of Brisbane but the same thing is happening right around Queensland, everyone is pitching in where they can, even people who have lost everything are also helping others out, this will see new friendships born and people who will never be forgotten.

This entry was posted in Australia, Queensland and tagged Brisbane, Floods. Bookmark the permalink.