This baby shark not only had cyclopia, (one eyed) but it was albino as well. Fishermen caught a dusky shark in the Gulf of California, when they cut the shark open it was carrying young, and this strange one eyed baby was amongst those babies. Researchers are saying that if it had of been born it would not of lasted very long, as it had other deformities as well. Its tail was malformed which apparently would have made swimming very difficult. There didn’t seem to be any nostrils, but its gills were normal. 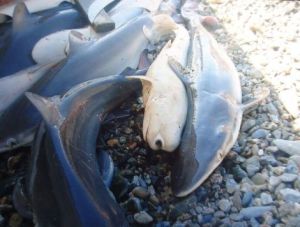 There is a very good article about this shark in National Geographic with more photos.

Also there is a small article about this shark in the Telegraph.

This entry was posted in Animals and tagged Cyclopia, Gulf of California, National Geographic, Shark. Bookmark the permalink.