Every year here in Australia we have this competition, Sculpture by the sea, held in different parts of Australia, but of course always on the beach. There is great prize money to be won. This year it is being held at Cottesloe Beach in Perth which is the capitol of Western Australia. The sculptures will be on display till March 19.

The photo above won the artist a scholarship valued at $15,000

But the other artists still have a chance of winning some prize money. On the 18th March, there will be a People’s Choice Award and the National Australia Bank Kid’s Choice Award. 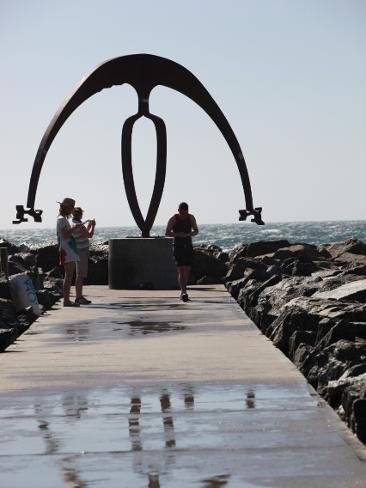 Even if you hadn’t read the name, I’m sure you would of guessed that it was a guy taking the photos for the Perth Now picture gallery, he did manage to get in a couple of Ladies in bikinis into the photos.  🙂

See more of the Sculpture By The Sea in news.com.au Picture Gallery.

Perth Now also has different pictures in their Picture Gallery.

Last year this competition was held at Bondi in Sydney, if you would like to have a look at the sculptures that was presented in 2011, (personally I liked the sculptures from last year better) news.com.au has a Picture Gallery of these as well.

Learn more about Sculpture by the sea on their official web site.

Other related posts from my blog:

This entry was posted in Australia, Entertainment and tagged Cottesloe Beach, Perth, Sculpture by the Sea, Western Australia. Bookmark the permalink.

60 Responses to Sculpture By The Sea: Perth Australia (Pictures)