Our whale watching season has started here in Australia. The Whales start arriving from late May or early June right through to November. The whales migrate north from the Antarctic to the warmer waters of Australia. The whales that you are most likely to see are southern right whales and the humpback whales.

The humpback whale doesn’t seem to worry too much about boats or people and seem to frolic and play more. Whales can be seen from a lot of different areas around Australia, but this post is about the whales on the East Coast of Australia.

Two humpback whales breaching non stop for a good hour or so just off the heads. (Sydney) At one point there was a group of 20 kayakers in the mix as well getting a great view. Pic:Jonas Liebschner http://www.whalewatchingsydney.com.au
(from The Telegraph picture gallery)

Over the last week, a lot of humpback whales have been seen in Sydney Harbour, breaching and just playing around on their journey to further up north along the East Coast. There is nothing more magical, exciting than seeing a whale breach, the sheer size of the whales is just extraordinary. 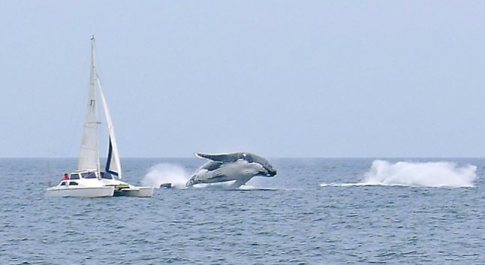 Whales at Jervis Bay. A boat, following a calf and mother a bit too closely, didn’t realise there was a male on the scene until the two adults jumped clear out of the water about 10m off his port side. Picture: Purchase Andrew (from The Telegraph picture gallery)

Of course every year, everyone is on the lookout for Migaloo. For those that do not know Migaloo is a white humpback whale, that we see every year on the East Coast, and what a majestic whale. Migaloo is male and was first spotted in 1991 off the coast of Northern New South Wales, and has been seen every year. He has not been seen yet this year, but he does normally arrive late June or early July, one year he was not seen till August.

Baby white whale spotted with its mother in the ocean just off Botany Bay. Picture: Damian Shaw  (from The Telegraph picture gallery)

Last year we had a lovely surprise, as a new white baby whale was spotted. At first everyone thought that maybe Migaloo may have been the father of this beautiful whale, but it turned out that wasn’t the case. The mother was not spotted at the same time, but a couple of weeks after the first sighting, Mum was seen with the baby, and this year Mum and our white baby have already arrived on the East Coast. As far as I know this new baby has not yet been named.

You may also like these posts from my blog: