Harry the baby pygmy hippo who’s videos and pictures went viral on the internet in March 2012 has unfortunately passed away. A little bit of info on the pygmy hippos:

They are native to Western Africa, also very small populations in Sierra Leone, Guinea and the Ivory Coast. An adult pygmy hippo stands about 75 to 83 cm or 30 to 32 inches high, they are 150 to 177 cm or 59 to 70 inches in length, and they only weigh 180 to 275 kilograms or 400 to 600 pounds. Their lifespan in captivity ranges from 35 to 55 years, lifespan in the wild is unknown but it is thought they do live as long.

If you would like to know more about the Pygmy Hippo, Wikipedia have an excellent article. 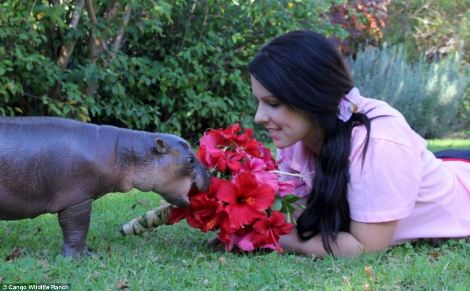 Strong bond: Final picture of Harry with devoted carer Toni Inggs who was like a mother to the little hippo (photo via mail online link below)

Harry the baby pygmy hippo who is featured in both videos below, unfortunately has died. He had to have an operation for a hernia, and after the operation he went into heart failure and passed away. Very sad news. I hope you will still enjoy the videos, he was so very cute. You can read about Harrys passing in Mail Online. There are some beautiful photos in the article, they are large photos, so it does take a bit to load if you have a slow connection.

This entry was posted in Animals and tagged Cango Wildlife Ranch, Pygmy hippopotamus. Bookmark the permalink.

75 Responses to Harry the Famous Pygmy Hippo has Died. (Video)